Are You A Prawn?

Posted by majidtakes on August 22, 2015 in A Story To Tell!, Are You A Prawn?, Family Stories, Life's Lessons For All!, Majid Al Suleimany, My Short Takes!, New Website - www.myshorttakes.com, Short Takes Article, True Life Stories! | Leave a comment

Are You A Prawn?

I had posted the below poster in the Social Media and it received unbelievable overwhelming positive responses – and I wished I had received similar at least with my Books Postings! 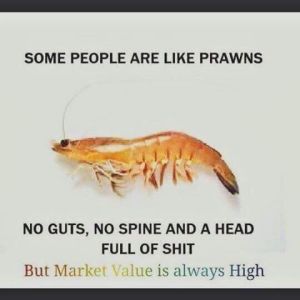 A long time ago when my sister was still alive – I visited Tanzania on holidays! My late sister PBUH Allah Rahmah had invited me for lunch! Guess what was on the menu –all prawns and lobsters – coconut rice and grilled barbequed lobsters and prawns – and with the coconut curry lobsters! She found me not partaking the food with the zeal she had expected to emanate from me – as she knew that I do like my food!

I told her – My sister you forgot that I do not eat sea food except fish only? She was devastated – and she lamented that she had gone very early in the morning that day to buy the prawns and lobsters that had costed her quite a lot for a widowed at home woman! In the end she ordered for me just plain chicken curry from a nearby restaurant – and I ate with the rice!

When I was a student in UK in the early 1970s – there was a Big Students Annual Party thrown up by Shell International – the parent company of Petroleum Development Oman PDO which had sent me for the course in UK! Everybody was enjoying themselves with the lobsters and prawn infested dinner with exception of you know who- who got served separately with chicken legs instead!

At a Departmental party years later – my Top Boss who simply hated me as a person and my guts was boasting loudly – already top drunk – that only ‘poofs and sissies’ he knows do not eat prawns, crabs and lobsters – that were the main menu! So indirectly he may have known that I do not eat these things – and perhaps to make me sad and miserable? The main menu was seafood, anyway!

The East Africans have this expression – If someone wants to insult you – he does not have to choose his words carefully! Anything you can blurt out that comes to mind goes!

So from that day onwards, I always gave an excuse not to attend any more parties from his side! Ironically – and what they say – what goes around; comes around – because many had ‘food poisoning’ from the lobsters I gather – and had to go for treatment at the Medical clinic – except the Host who seemed more protected by the consumed alcohol!

A Big Joke after the weekend in the Offices! I understand that is why Her Majesty The Queen never partakes sea food on her travels abroad!

At this party above – a good Indian friend volunteered an ‘explanation’ as to why I do not eat lobsters etc.! He used reincarnation theology being himself a Hindu person – though top drunk too – that perhaps in my past life I was a lobster – so how can you eat your own kind? That is cannibalism – he asserted! Though I wanted to challenge him if he was sure of ‘lobsters not eating lobsters theory’ – but I thought better of it – and went just quiet! What about ‘big lobsters’ eating ‘smaller ones’? I could Google eat – but who really cares? Certainly not I!

At a family gathering one day my son in law Ali pinned me down to offer a ‘logical explanation’ as to why I ‘do not eat lobsters, prawns and crabs’ – his nickname being Ali The Fisherman! These things upset them more! Despite I do not eat ‘these things’ I do buy and allow them to be cooked for visitors – and guess what the topic will turn to when I do not partake the stuff – every time even if they have heard of it before! So I sarcastically and cynically retort – finish the dinner – and I will tell you why! Oh – they say in disgust – because they have heard of it before!

Not to hurt peoples’ feelings – I always give a lame excuse that ‘it causes rashes on my skin’ if I try eating prawns! It befalls them – and always works – however the pestering!

If you like lobsters, prawns and crabs – may I suggest you do not read The Addendum? J !

But frankly – it is true the poster that – Some people are like prawns! No guts, no spine and a head full of shit! But market value is always high! (Or are proud and conceited! Like I always say after the Offices environments – it is in Families where people most misbehave and conduct themselves badly! And behave just like prawns!

I hope you have enjoyed the article. If you have – please let The Chief Editor and The CEO of Oman Daily Observer – observerfeatures@gmail.com – editorobserver@gmail.com – know that ‘you miss my Columns – Between Us Only!’ 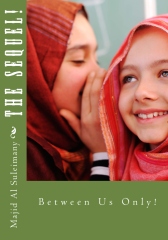 The columns used to run every Sunday and Wednesday before being abruptly ended more than 2 years ago- when I criticised The Egyptian Army murdering in cold blood their own peoples demonstrating for reinstalling Morsi as elected President of Egypt! And the support they got from some GCC countries! I am not Egyptian – nor Pro or Anti Morsi – but a human being observing my faith and as with human feelings and concerns!

How many Omanis can write like this? Allah Kareem! God Is Great! Ameen! Amen!

Repeat – Please do not read if you like lobsters, prawns and crabs!

In the island of Mafia aka Chole -100 miles from Dar es Salaam – Commercial Capital of Tanzania – my late Father PBUH Allah Rahmah – he liked sea food like crabs, prawns and lobsters! If you see how they are cooked still alive – you will never eat one again! 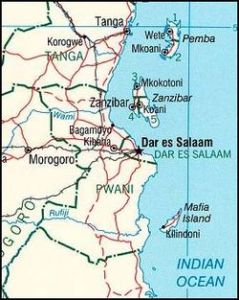 So they put these large crabs still alive and deadly – into a big boiling hot pot! They cover the pot with a tin cover and lay a big stone on top of it! You can hear the ‘tap’ tap – tap – tap as they ‘try to get out’ – open the cover please! We are being steamed hot alive here! The taping goes on for a long while – because they have a life of their own!

One day ‘one strong crab’ managed to push the lid and stone away! Our African house boy pushed it back in – and put a larger stone more on the lid! It took more than 5 minutes of incessant tapping to end!

How can you eat – after this? I ask you!

After all, they look so ugly and terrible – like Big Insects! L !

P.S. You were warned not to come here! Have a Smile! Take Care!