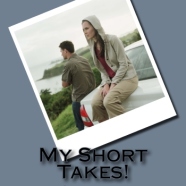 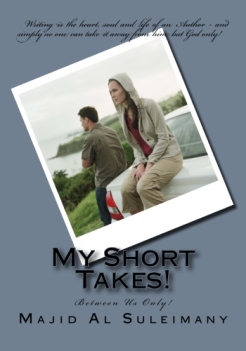 My Short Takes – Between Us Only!

My 24th book and book 12 in the series of Between Us Only! My book website here at www.myownmajid.com. This book is also the First Edition of my earlier book Short Takes! I have added recent emotional touching feeling articles from my website www.myshorttakescom

This book contains equally interesting subjects and topics. It has articles from both his first Two Books, but the concentration here in this book has been the human interest stories touching lives of the peoples (and residents) of Oman and The Gulf Region as a whole.

Images have also been added in this book – which was a point raised by Readers before! Some of the topics have been made out as stories, but the messages coming out are openly vividly and crystal clear to all, in many cases tit comes out outright and facing the Reader without any doubt or innuendos.

The Writer was a weekly Column Writer in The Oman Daily Observer Features under ‘Between Us Only’. He had started writing in the column now for the past five years, and his column appears every Saturday of the week. He has worked for over 25 years as a Human Resources Professional and Expert in mainly Oil Companies in Oman and GCC.

In addition, he has also worked for over 12 years as a Management and Human Resources Consultant, Expert and Advisor. He has also been widely exposed to young Omani Graduates Intake Programme, their mentoring, coaching, guiding and counselling and for National Staff in general.

He holds an MBA in International Management (UK). Lives in Oman, married with grandchildren.

He had started writing as a hobby when he was 12 years old, and his first project in writing (My Most Vivid Dream) had won him a National Award in a country outside Oman.

He used to be a volunteer writer to another English Daily in Oman before he became an Official Column Writer to the Oman Daily Observer. His articles had also appeared in wherever he was, School, Colleges, Company Magazines (PDO) etc. His style of writing is ‘with a fresh approach and direct from the heart’ and as if speaking to you directly, having known you and using personal experiences and exposures – and examples to illustrate his points, views, and suggestions – characteristics of his writing style.

Writing is the only profession where no one considers you ridiculous if you do not make any money! – Jules Renard

All My Books 24 Images