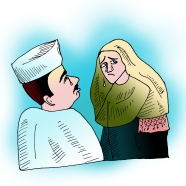 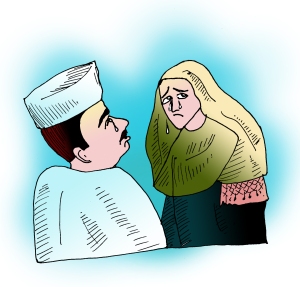 From Boy To Girl.

Hi!. First of all I do not know if it will be proper for me to write to you directly? I have talked over with your friend S, who told me that she is prepared to take the letter to you directly and that you have just come out from Aydah (Leave granted to Muslim women when husbands expire)!.

I was very saddened and disheartened to hear of the death of your husband Z from the dreaded disease that we are all scared of!. Please receive my sincerest condolence, and I pray to God to give you patience and faith in facing this irreparable loss, and there is no salvation except in Allah our Lord and in prayers.

When I heard about the situation I was so worried, and had gone to see the doctor. The doctor stamped on the form, after full investigations, NNP. I was scared even to ask what it meant?? Later on I got the courage to ask the nurse, and she told me it meant Now Not Positive – why write such things instead of a simple Negative??.

By mistake I had left the paper on my desk in my home office, and she (the wife!) had found it and wanted to know why I did the test, I had to lie to her that it was because the office wanted everyone to be so tested!. I thought the days of lying are over and past me, but I find I can still lie with a straight face. Sometimes I just wonder aloud if she really suspects, but takes the higher road of showing she does not suspect because she wants to believe that there is nothing wrong going on?. A let things lie, and do not rock the boat thing? She is a good actress, anyway! Evil too!

I know you are still very angry with me ‘for letting you down badly’, but I just could not do it to leave her after 22 years of our marriage, and my youngest  daughter of only 10 – who is the closest thing to me in my life, I just could not hurt her!. I know that if I did, I would never forgive myself for the rest of my life. I hope you will learn to forgive me and forget, and that we can remain as very good friends always. If there is anything I can do, please do not hesitate to ask me, whatever, if I can do it I will. If not I shall understand why!

Take care of yourself and your children. Once again my sincere condolences, prayers and wishes are with you always.

From Girl  To Boy.

Thank you for your nice and lovely letter!. Though I cried a lot whenever I read it, again and again, in a way it went a long way to console me!. I am disappointed in you, though – it took you that long to write to console me , I thought you would have written to me sooner?? But better later than never!

Anyway, the good wife was there in the funeral, and she was very helpful and consoling!. Sometimes when I looked at her, I just wondered if she knows, but if she did, she is a very smart lady who just does not show it!! Or like you say devious actress, whenever she had upset you in the past, and you wanted to talk things to me about her! You know that made me very uneasy, after all the things we were doing behind her back, we were not innocent angels either for that matter!!

So again it is about you?? Always you you! You were so worried and you went to have a check up?? I do not want to frighten you, but you know he too had gone for a check up when the friend of his had also died. He too got NNP, and he was very relieved! Just like your wife, I too found it, and asked him about it! He too replied that ‘it was required in the office’. The similes are too frightening coincidental, but that should not frighten you!! But knowing you, I know it will! It makes me have a sadistic gratification that this will, but you deserve it under all the circumstances, after the way you had treated me so badly. I did not want to fall in love with you; you seduced me and made me!

I was a very innocent, straight and religious girl, and you went on to do what you did, and then discarded me just like that when you saw that I was getting serious with you! I had never asked you to leave your wife, but you were the one who kept saying that you will, because you cannot manage ‘to keep two wives’ at the same time!! I was ready and contented to remain as number two, but you said you will not have it any other way. I had to be number one, in the end I was number zero!

You know my Z had gone with some friends to that place from here, there they met those cheap easy going girls, and that is where I think they got the disease, or that is what Z himself suspects!. The poor man, this is what he told me before his breath left his body and crying to me to forgive him!

Let me tell you that I was tested also and told NNP also before, but know that I was possibly a carrier of it and would pass it on to others, though would not have it myself *that is the full blown thing!).

I am sorry to have to tell you this – but be careful too!  I was seeing Z the same time (that is before he married me) that I was seeing you, after realising that you were not that serious with me!

I had to have a fall back position, so I was seeing you both at the same time …………… the man collapses! The wife reads the letter, all hell is let loose!

Sad and tragic isn’t it? Or they had deserved each other?

← Are You Afraid? Be very much afraid! The Garbage Truck! Life’s Teachings! →