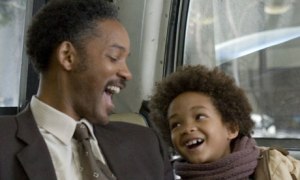 Go on in and greet your Father – the boy’s mother prompted the son.  It is Eid Day and it is in our customs, tradition and heritage to visit and greet parents and the elders on this auspicious day.  Go on in – the Mother prompted the son again.  The 12-year-old boy looked frightened and scared.  He had matured too fast for a boy of his age.  Life was a great teacher and learner; it makes you older and practical as it teaches you on.

The mother looked at the entrance of the newly built villa.  There were almost two new European top model cars she could see as she came in with her old beat up Japanese car she had driven all the way from Muscat to the Interior hometown.  She could see a lot of new shoes at the Majlis entrance, smaller sized shoes belonging surely to the younger men.  They must belong to the man’s sons from the elder wife.  The man was not that rich, but he had a large house and farm – and some shops too.

Images Father and Son – For Demonstration Purposes Only!

As the boy entered the room, he could see his elder brothers from the elder mother looking at him and whimsically whispering to themselves.  They looked like poking fun and mirth at him.  One was whispering at the father’s ear.  The father shook his head and glared at the  boy as if he did not like what was being whispered to him.  The father smiled to the entering boy, he got up and urged the boy to come in.  Instead of this encouraging the boy, this action of the man seemed to scare and daunt him all the more!  But move to the father he did.  He kissed his father’s hand in greetings.  He also kissed his father’s head in finality.

The father made a signal to the boy sitting near him.  Move a bit and let your younger brother sit here.  The boy moved reluctantly, he did not want to move from the favourite position and to let especially the new son in the family take his place.  But he had to abide to his father’s wish and he did not want to be blamed as the one who had started and had made a scene.  After all, this was Eid day – and a day for happiness, festivities and celebrating occasion.

So tell me – the father asked.  Did you come alone?  Who came with you?  Did you come with your mother?  Is she waiting outside – the man was answering his own questions.  A tray of sweets and halwa was brought in front of the boy.  He wanted to scream – but I have not had yet breakfast father!  How do you expect me to eat halwa before having breakfast?  He kept it all in – he too did not want to create a scene.  Besides, perhaps this was the custom in the interior, and not in Muscat.

He did not want the rest of hem to jest and mock him and his mother again – especially the mother just because her Arabic was not good having been born in Zanzibar.  I am going to show them the boy had made an early promise to himself.  I will speak very good Arabic and impress my father too.  At least I speak very good English and some French too – compared to my elder brothers and sisters from my elder mother.  When he used to say this to his mother, he used to make her cry uncontrollably and profusely – he still did not know why.  All he wanted was to assure her, and hold her head high and let no one – even if it was the family, she got married to – humble her and bring her down and depress her again.

The father felt what the boy was feeling.  So smiling all he could, he whispered to the boy.  Did you have breakfast?  The son nodded negatively.  The man bellowed out – What is this? Bring breakfast for my son.  No sweets and halwa till later on!  The other boys looked at themselves in bewilderment at the stress of the word my son. Are we not his sons too – they asked themselves?

The visiting boy started to feel now comfortable with his father.  He remembered what his father had told him – I want you to adhere and respect me – not to be scared and be afraid of me.  I want you to treat me as a friend, you can talk to and tell me if there is anything that scares and worries you.  OK – do we have an understanding and agreement here Son?  Promise me – will you?.  You must let no one make you scared, afraid or feel small.  Remember you are the son of who?  OK, son?  Let no one ask or use you to ask favours from me.  They will try to befriend you for their own selfish reasons and interests. But remember you are my son always!

The boy wants to remind the father of the promise to him by the old man.  But he looked around him.  All his brothers and cousins were well dressed in their new dishdashas and msaars (turbans).  He remembered  seeing all those new shoes outside.  His mother was dressing him in that old dishdasha.  It was the newest of the old lot.  He told his mother – Mother do not cry.  One day I will grow up and find a good job.  I will look after you mother – I promise.  Instead of assuring the mother, this made her cry all the more.

And I will show daddy for ignoring and forgetting about us.  I will show him, Mother.  I will work hard, save and have lots of money.  I promise you. But I will never forget or forgive what dad had done and not remembered us – even on this Eid day.  Mother, I promise. He did not give you money to buy any new clothes – even for Eid!

No, no the mother persisted.  Sometimes I too do not understand your father.  He is a very good man.  After all, he is my first cousin too.  Our great grandfather is the same man from  Manah in Nizwa region.  You must not blame your father.  He is a very good, kind gentle man – but he listens to the wrong people who advise him wrongly.  That is his problem.  Otherwise, there is or there should be no problems between us – I assure you son.

The breakfast had brought him back his spirits and courage.  So he asked the father, father tell me.  You know  my mother only works in the oil company as a clerk.  She has also to pay rent, put food on the table and do so many things.  You know father, no?  Then how come – the boy had finally the courage to ask – you did not give us any money for Eid – but you did for my elder brothers and sisters?  Don’t we also deserve your care and attention – me, my younger sister and my mother?

You see dad, the boy finally let it out – my mother could not even afford to buy me a new dishdasha.  She does not have the money to do so. Are we not your family too? Why only them, and not us too?  But I told your mother to buy you a new dishdasha, the father insisted lamely – I told her.  I am surprised that she did not.  After all, she can afford it – she is working in a good paying job in that oil old company.  I have to look after your other brothers and sisters – their mother is not working like your mother.

The boy looked again at the father.  The urge to get out and make a scene was getting stronger by the minute.  He wanted to shout out – Do you know how much money my Mother earns? I will take my mother from here and you will not see us again.  He then remembered and reconciled to himself – he was still 12 and he could not drive back to Muscat.  Besides, even if he had urged and persuaded his mother she will not listen to him.  That is how she had ended up as the doormat to his father.  And his father knew too – and there is nothing he could do about it.  At least for now for sure.

As if reading his mind, the father was giving a queer strange look at the son.  He the son said nothing more to the father.  The father said nothing to the boy.  It seemed a hidden communication and telepathy had set in.  Not to say anything more to each other. His elder brother from the elder Mother touched his old dishdasha – teased him – your Mother saving again for her folks in Africa? Again what happened last time. Till the next time  that is – till next Eid again!. He looked forward for the day to end, so he could return with his Mother to Muscat.

← Are You Our Mother? More Emotional Touching Stories Here! →